WaterAid’s Catherine Feltham (pictured above, third from left) is the film producer behind Aftershock. Here she shares her experiences of living and working with the community in Kharelthok – and what it means to have documented their story in virtual reality.

On 25 April 2015, Nepal experienced the country’s worst earthquake in 80 years.

It registered 7.8 on the Richter scale and was followed on 12 May by a second quake, which brought yet more devastation to previously unaffected areas and already damaged communities.

As aftershocks continued to rock the country, thousands of people had to come to terms with the loss of family members and friends, as well as the destruction of their homes and essential infrastructure – including taps and toilets.

After 20 years of working in Nepal, many of the communities we support were seriously affected. Kharelthok is just one of them. 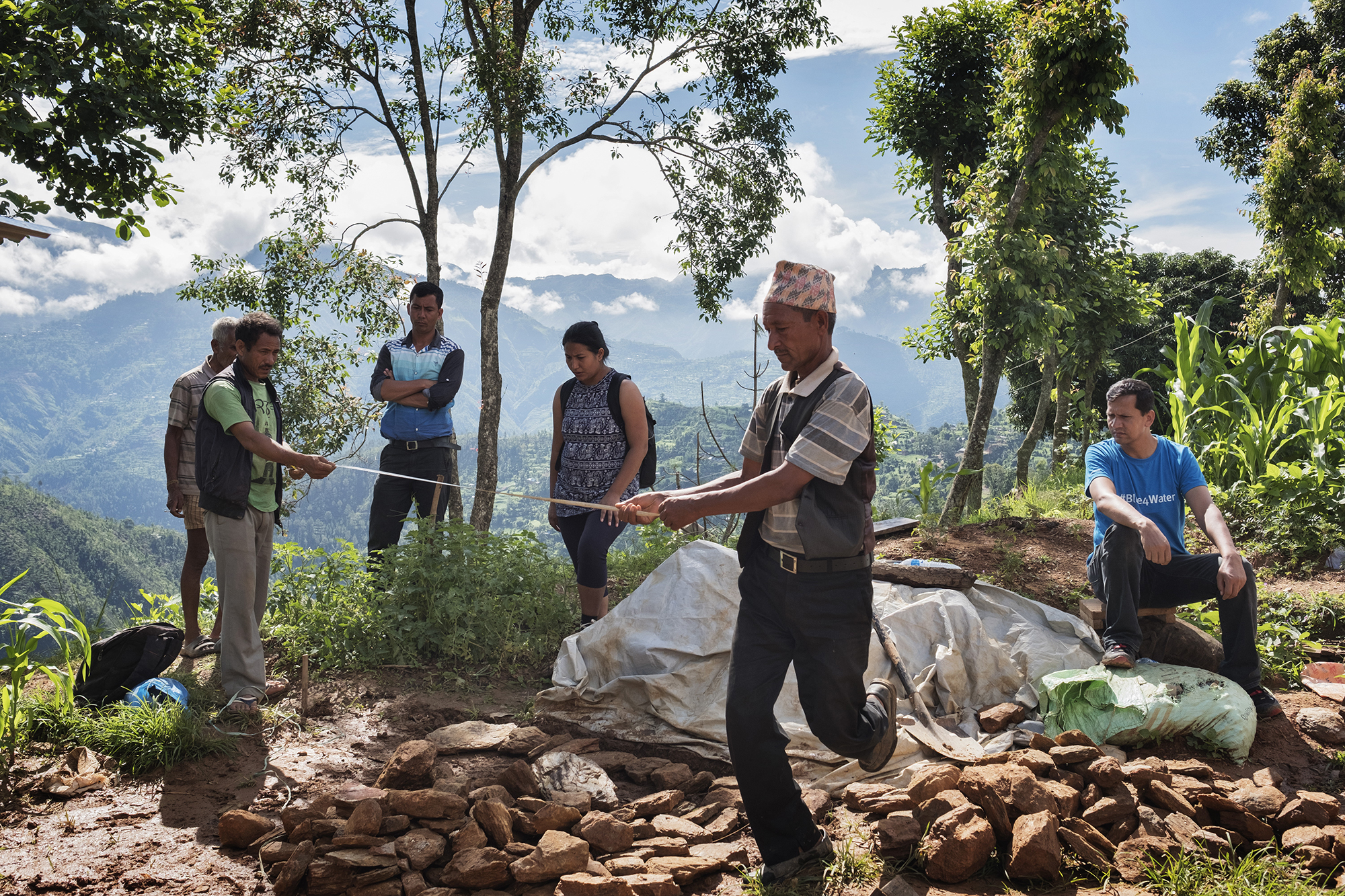 Krishna, second from right, at work in Kharelthok.

A remote and peaceful village

Situated a few hours from the buzzing capital city of Kathmandu, Kharelthok is a remote and peaceful village.

Houses are perched on steep hillsides, often covered in clouds which lift and break to reveal hot sunshine. People live side by side with their animals and work hard in the fields all day.

Life is not easy in Kharelthok and all around there are clues to the devastation the earthquakes caused. Rubble lies everywhere and goats and chickens live in houses condemned as too dangerous for human habitation. Other buildings simply lie derelict.

It’s in this community that filming for our first-ever virtual reality documentary, Aftershock, took place.

Krishna, the district's only plumber

The film follows the story of Krishna, the district’s only plumber, as he repairs the community’s vital water system which was damaged during the 2015 earthquakes.

At times it seems he faces an impossible challenge: mending and replacing damaged pipes and securing the flow of clean water from a remote water source up through the steep hills of Kharelthok. And the stakes couldn’t be higher: 80 households are relying on Krishna for access to safe, clean water.

But he’s not working alone. Our local partner KIRDARC is now providing essential support, as well as enabling families to build their own toilets and attend hygiene education classes – critical elements in securing a healthier future for all the village’s residents.

In Kharelthok, as in all our rehabilitation projects across Nepal, Krishna and KIRDARC are committed to building back better.

That means incorporating modifications that will make taps and toilets more robust in the face of future disasters and selecting sites for construction that won’t be affected by landslides or falling buildings.

It’s an approach we hope will create long-term access to clean water, toilets and hygiene for 30,000 people living in earthquake-affected areas in Nepal over the next two years – an ambitious goal, and one that’s being made possible by WaterAid’s generous supporters and partnerships like the HSBC Water Programme, which funded the Aftershock documentary. 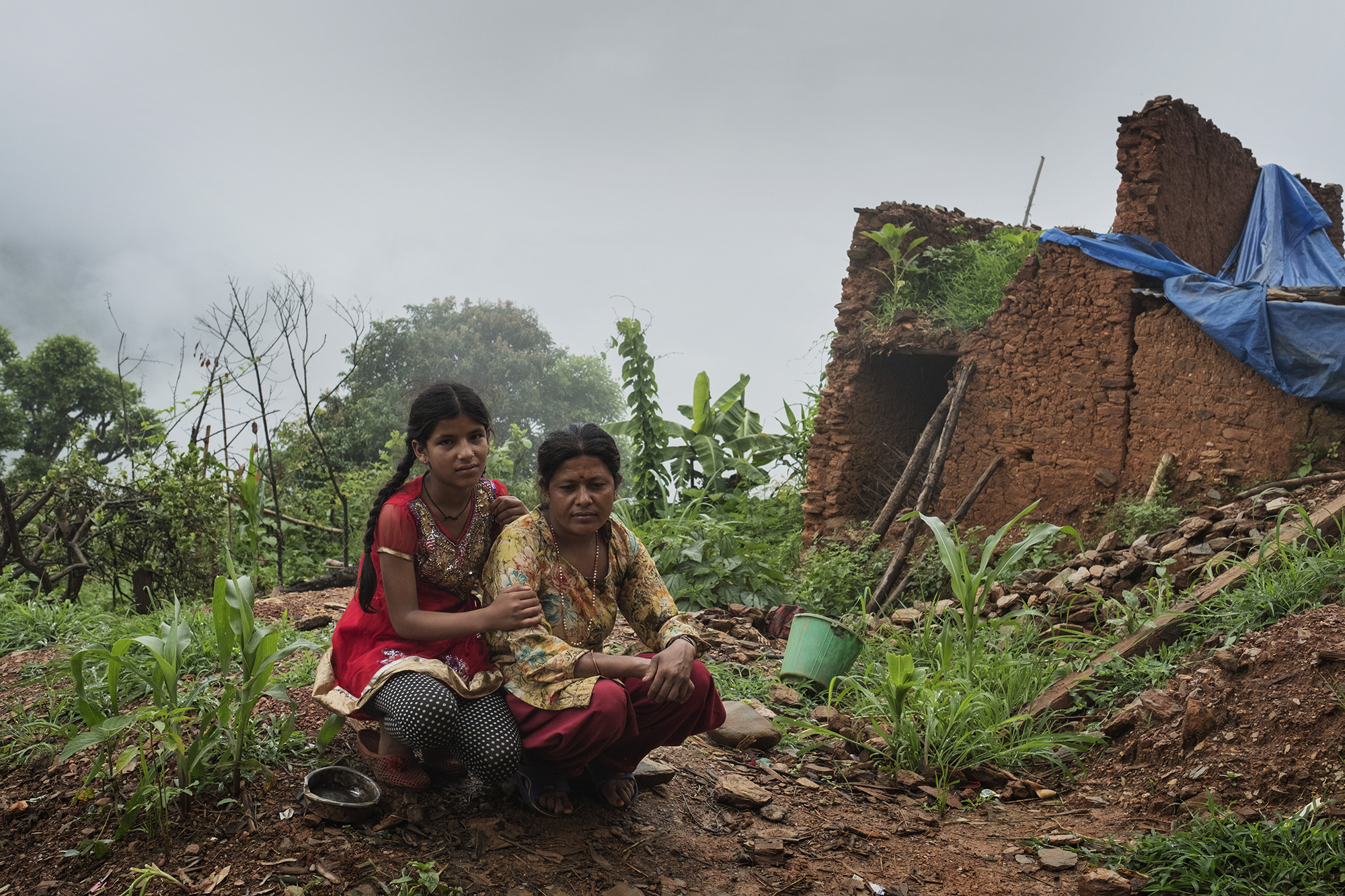 A mother and daughter outside their damaged home in Kharelthok.

The film is not only testament to our joint commitment to ending the global water challenge (the Water Programme has enabled us to reach more than one million people with safe water and two million with sanitation globally since 2012).

It’s also a sign of our willingness to embrace new technology and the potential it has to bring people closer than ever before to our work and the communities we’re empowering, as they transform their lives through access to clean water and decent toilets.

And we know the virtual reality experience is powerful – as this footage from Kharelthok shows:

Having spent nearly four weeks living and working alongside the community as part of this project, it’s a huge privilege to share Kharelthok’s story in this way, and to be a part of their journey to a brighter future after the devastating events of 2015.

We'd also love to hear your thoughts. You can contact the team using this simple form, or share your reactions to the film using #AftershockVR. We can't wait to hear from you.